skip to main | skip to sidebar

A list of stories online with all the negative turns and events of the WORLD ECONOMIC CRISIS.

Posted by Ready To Learn Spanish @ at 9:34 AM No comments:

We have moved our Shoe Drop Blog on a new page. Follow this link.

The Shoes Keep Walking In

Just like a wild fire, the word got around that we are doing a shoe drop. Within two weeks, what started as 50 plus shoes has multiplied to 200+ Generous support from Jill, and many parents have jumped on board with the donation process. We what to thank each and everyone who has taken the time to help with the project, especially, the donors who gave the shoes.

We have already set a date on when we plan to drop off the shoes, we will keep you posted on the results as we get them. We hope to go even further to El Salvador and Guatemala for future projects.

Thanks for reading this blog.

Happy New Year readers of this blog! As we are preparing for our shoe drop in Mexico, I wanted to make sure to update some of the followers and readers of the blog. Currently we have 20 + more shoes to give out to the kids, Kisha, one of our amazing friends has bought shoes from Delaware area, and has brought them to Los Angeles. She said the shoes where a great buy due to no taxes. Plus we have Jill who is also coordinating something in the Castaic area and working with some moms to collect some shoes. The project seems to be coming along, and more and more people are willing to join in on the small cause. We are hoping to make this very successful, and to plan for other trips in other countries.

As we are brainstorming to more ideas for the future, I had suggested to also make future trips to Guatemala, and we can work with a local shipping company, and meet the supplies down there to deliver them in person.

A thank you letter from LA Food Bank. Just posting this so the others who have contributed can see the results. Great job everyone who help support the cause! 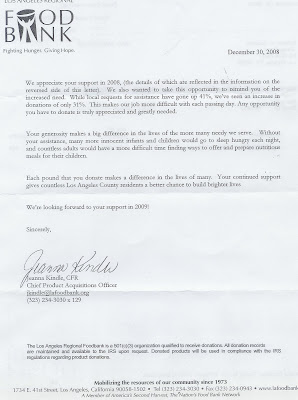 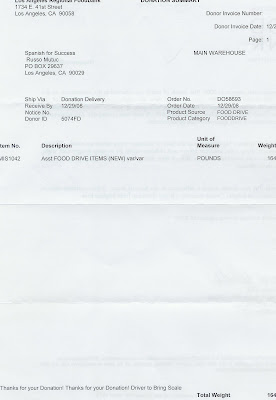 The day we delivered our collected goods. We had a pretty interesting tour of the place. Amazing how the whole process works. This facility only hands out donations within Socal Region. We're definitely looking forward to the next drive, and it will be bigger! 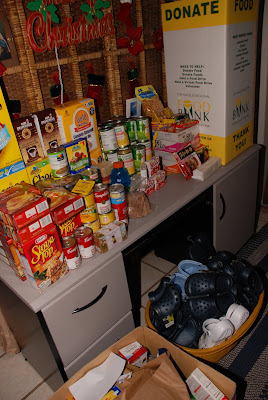 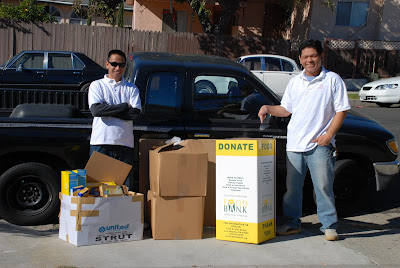 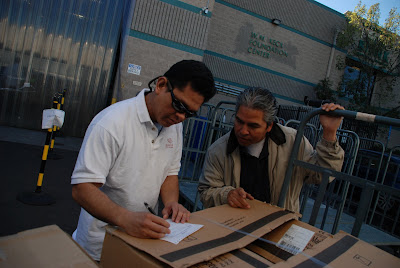 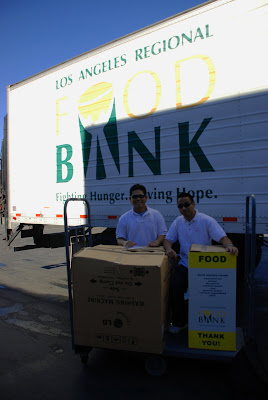 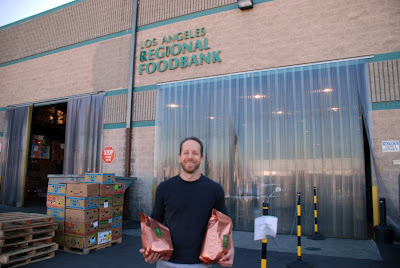 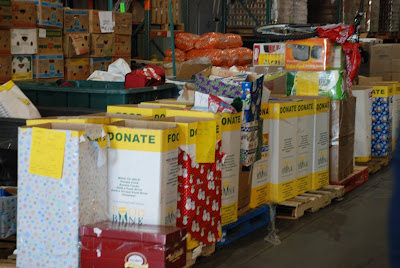 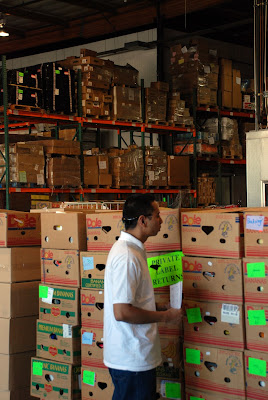 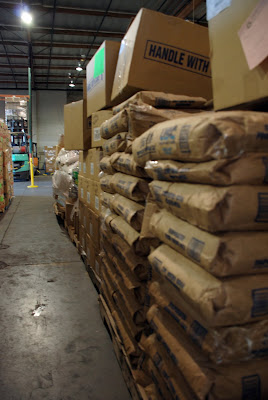 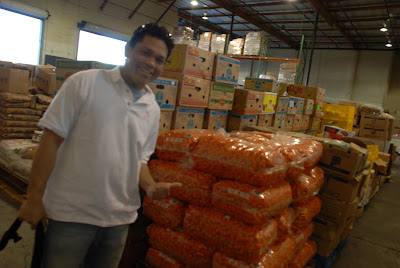 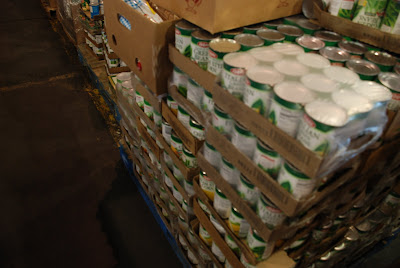 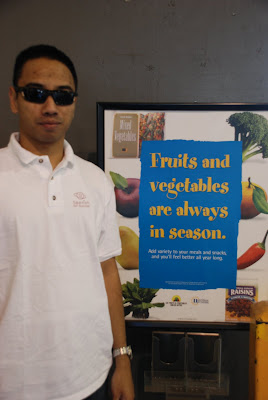 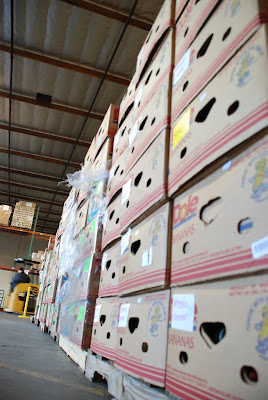 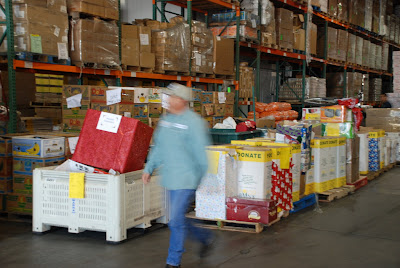 Posted by Ready To Learn Spanish @ at 2:06 AM No comments:

We are tallying up all the collected goods that we have done for the past 2 months. There are so many people to thank (see other blogs) for some of those who helped this make a special food collection, plus handing out food to the homeless of Los Angeles.

The food drive for 2008 is coming to an end, but we are still going to continue on with the mission to help the unfortunate. Some of the other projects i.e. Hand out foods to the homeless every month, plus we are planning on a shoe drop maybe somewhere in Mexico or further down south. We have already started the collection, currently we already have 20 kids clogs.

Here is the result of the food we collected. We have two full boxes of food goods!


We plan to drop it off to the food bank, this week, so come check back with us.
Pictures to come...
Posted by Ready To Learn Spanish @ at 6:28 PM No comments:

Knock On the Box


Knock On The Box

What an interesting night to go out and drop off some food to the homeless. Started the project with picking up the gang (Jesse Yamashito, and Paul Kemp) The preparations started a few days ago, when monetary donators gave us some cash to buy some food goods. This day in particular, Wednesday, Jesse was the one that made all the preparation of the food. He trekked from his home to 99 cents store, about 1 mile away, and back, walking. After picking him up around 4 pm, we figured it was a late start, but figured we had to make the push, even if the sun is down.

Ironically, before we went out, I had posted an update on my Facebook, and stated “Russo is about to do another brown bag food give away in skid row. Hopefully no problems arise.” I should have withheld those statements as, incidents did occur.

So as we started our drive around, we figured we can try and find some homeless people away from downtown, and maybe give all the food by then. This way we can try and avoid Skid Row, due to safety at night. Come 5, 10, 15, 20 minutes into it, we were not having any luck. In my eyes, and the group, there seems to be no homeless around. Could it be true that Los Angeles, and the developers have bonded together to ship them out in the outskirts of San Bernardino area? So we pushed on, as we were bound for downtown area, we got stuck in street traffic, hardly even moving, at most 5 mph. As we were trying to figure out on the shortage of the homeless, we suddenly get rear-ended by a white Lincoln Town Car. The impact alone was hard enough, but no one was injured. But a pedestrian had witnessed and heard all of the impact. We pulled into the right to investigate, luckily I was driving my pick-up truck. The guy who struck me, tried to down play that he actually hit my truck, and that there was no damage to the truck. All along the pedestrian was starring and laughing in the side walk. After I checked with the group, and everybody seemed ok, and there was little damage. I figured, we were in good spirits, so I decided to let the guy go, “get out of liability free card”

Continuing on, we managed to arrive in downtown, we made a turn into Los Angeles streets, and here we can across a group of homeless people who actually lived in boxes. So we stopped and started to give out the brown bags, as we handed one out, the first guy we gave a bag to, had asked us to “Knock in the box” of his neighbor. I tried to with held my giggles, as I found that to be somewhat funny, and was not use to it. Sure enough Jesse knocked and left the bag at the door, per say. This very same group, we also handed out used clothes, esp. jackets and pants.

As we went deeper in the heart of Skid Row, we came across more and more interesting people. We drove up into this one street, where they were all line up behind the fence with the shopping carts and boxes. One by one we handed food, and to highlight this part, a man with a cell phone, blue tooth, looking like a bum, manage to get his hands with one of the brown bags. I guess our homeless group is now more sophisticated than ever.

Overall it was a good productive afternoon. It was another feel good side project, which I hope others can get inspired, and make a difference.

Thank you for taking the time to read this blog. 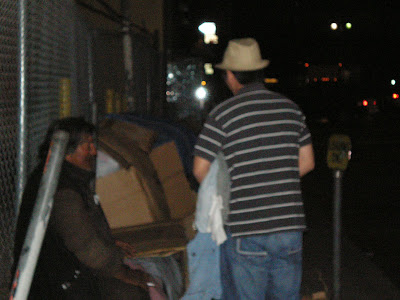 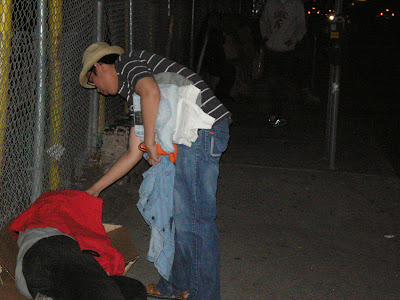